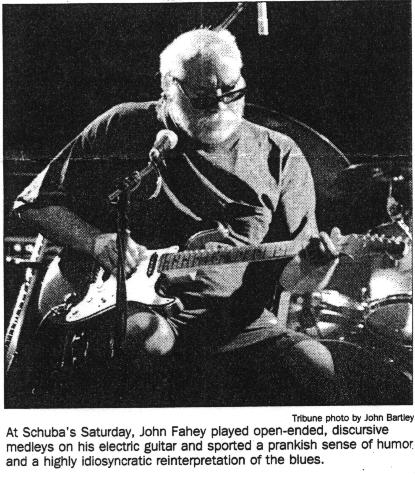 By Bill Meyer
SPECIAL TO THE TRIBUNE

Forty years ago, a philosophy student named John Fahey spent $300 he saved from his job as a nighttime gas station attendant to record and press 100 copies of an album called "Blind Joe Death." It was both a hoax and a revelation; Fahey represented it as a collaboration between himself and the nonexistent bluesman after which it was named in order to pull the leg of folk music enthusiasts. But it also announced to the world the advent of a skilled musician who was also a bold conceptualist.
Over the next quarter century, Fahey went on to establish the solo steel string acoustic guitar as a viable concert instrument. He made a varied and often brilliant series of records that wedded the instrumental techniques of country blues and bluegrass to classically inspired compositions. He also experimented with sound collages and sambas, and issued a series of popular Christmas records.