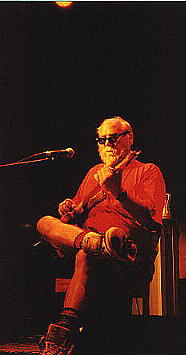 John Fahey has been on my mind off and on ever since I first heard that wonderful album, "The Transfiguration of Blind Joe Death", on a very hot day in 1968 while attending college in Lawrence, Kansas.  Who he is exactly I have never been able to conclude but my interest in him has always been beyond casual curiosity.  Let's face it, he is indeed one of America's greatest guitarists.

Seeing that he was playing in Berkeley this particular night, I immediately made a phone call to my friend Ron Chester to give him a Fahey alert.  He declined to go with me but encouraged me to get there no matter what I had to do.  And he wanted a report on Sunday.  That was about all I needed to brace myself for whatever traffic horrors just getting there would likely offer me.

The Freight was filling up fast by the time my turn came to funnel in.  Most of the people there could easily have been in college in 1968 as I had been and a fair number would have been graduated by then.  There was a single vacant front row seat, a nice fellow sitting beside it who agreed it must be mine.  A young fellow with a pierced lip named Dax.  He wanted to hear my Fahey story so I told him.

I suppose I should say that it was around now that I noticed the guitar.  It looked like a  Stratocaster, beneath it was a pedal and next to it an amplifier.  I thought it probably belonged to the opening act, Terry Robb.  Dax gestured and said "See that?  What do you think of that?"  I immediately sensed what he was getting at but thought no, its impossible.  Not John Fahey.

Dax then stunned me even further, saying Fahey had been playing around in the alternative music scene for a couple of years and has developed a following of sorts.  He said Fahey's real interesting, but he felt it necessary to add "if you like that kind of stuff".  He rattled off a list of alternative artists and groups with whom Fahey recently had been working.  Of course I had not even heard of most of these the people.  The electric guitar was Fahey's.  Oh my goodness.

A woman, apparently one of the owners or partners of the Freight & Salvage, had gotten up on the stage, took hold of the microphone and was embarking upon a biographical introduction of John Fahey when suddenly he appeared from nowhere..  There he was, standing sideways in a stretched out red T-shirt, denim shorts and untied aerobic shoes.  The woman quickly handed over the mic and surrendered the stage.  It was to be the start of a very interesting musical encounter.

He announces that he was not going to play any of his old stuff.  A lot of people want to hear it but he wont play it.  And here are some paintings you can buy for $5 apiece at the end of the show if you want.  Paintings he painted, Fahey originals.  With lackadaisical flourish he drops the whole hundred or so of them splat on a table below the stage.  No CDs - his new album called City of Refuge is great he says, he likes it a lot, thinks its one of the best hes ever done, but he has none to sell tonight.  Paintings only.  And Robert Redford wanted him to re-record Desperate Man Blues for his new movie [The Horse Whisperer] but John was going to tell him to use the original recording.

Then he began playing the guitar, the ominous electric guitar.  A melody of random notes, or were they, reverberated around the room for several minutes longer than one expects randomness to have to be tolerated.  It went on just long enough to become really beautiful.  Great stuff.

Next on the agenda, without pausing, a deeply somber blues bass line starting low and going down until it could go no lower and then starting over.  Artie Shaw's "Nightmare"?  I do believe it was.  Sure to drive you straight into depression or at least force you to resist it.  Then a great chord progression up the neck, chords of neatly planned discord, a delicious mess of roots knocked down a half step here and knocked up a half step there.  But what do I know?  I was enchanted.  I know little about music theory.  And I am smart enough to admit that.  That said, I will apologize in advance knowing already that I am likely to say something really dumb here.  To my ear, the chords Fahey was using in this "new" style were strikingly similar to those he claimed at the outset he was not going to play!  The  difference was he had done some fascinating reorganization of the intervals.  I was flabbergasted by what I was hearing.  This was masterful composition, no doubt about it.

The blues number went on and on becoming bluer as he recycled through it.  Once I found myself slipping into unconsciousness.  And a couple of times tears began to well up in my eyes from someplace so deep no images or discernible emotion accompanied them.  Only the sound of Faheys music was there, nothing else.   Funny.  Oh, and he did something really neat by suddenly inserting a full strum of a major chord in the middle of all that stuff (hell, it may have been the only one in the whole piece).  I remember it as being a sensational moment and I can tell you why.  It just sort of obliterated all that had come before it, hanging there in midair defiance.  I thought I saw him brighten for just an instant and I had to laugh.  And then he played a Christmas carol.  If you know anything about Faheys guitar work you also know his sense of humor.

Well over an hour later Fahey snapped a final random note and very abruptly stopped playing, tossing his head back saying "Thats it".  The show was over.  He slipped through the stage door and was gone.  There had already been an encore which actually had become a "second half" more or less. A stampede to the paintings began happening almost immediately much to my delight. The audience was completely stunned, you could tell.  It was a performance from which you had to recover for a few minutes before you could even think again.  We waited calmly for him to come out to talk to us, autograph our albums.  He did so with the graciousness befitting a real legend.

By the way, he did play some of his "old stuff" proving he is not really the crank he had pretended to be at the outset.  Maybe he was just nervous and felt the need to prepare the audience for things to come.  Its of no matter.  The guy is a delightful personality.  He loves that old stuff and we still love it too, who wouldnt?  But John Fahey is moving on full bore into the alternative style.  And it is absolutely brilliant.  My congratulations to you, John.

I reported to Ron on Sunday that Fahey was great.  I was not sure what else to say since he hadn't been there, if you know what I mean.

Back to the top
Back to "Now here's the part about John Fahey"
back to Concert Reviews
back to johnfahey.com